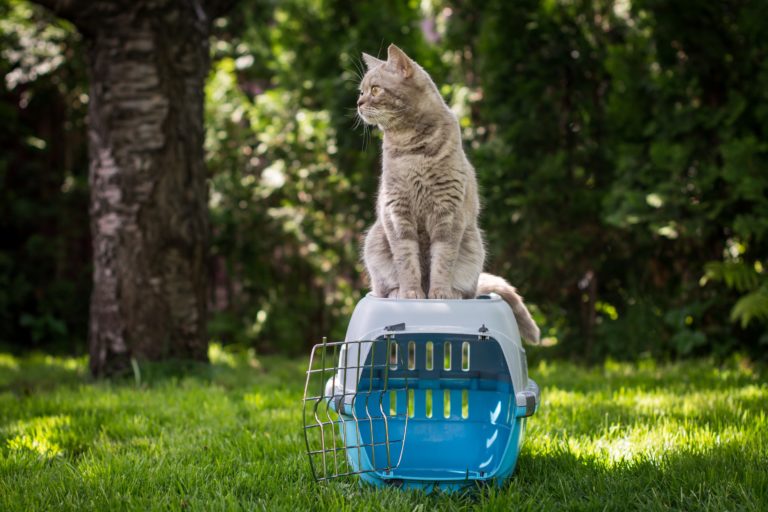 The basic equipment for cats includes a transport box. No matter whether you get your cat from the shelter, from the breeder or from private – the animal must be transported safely to your home. You will also need the transport box more often for visits to the vet. So it makes sense to buy a transport box before the cat moves in with you. That’s why we have put together nine tips about the cat transport box for you in the following.

The Cat Transport Box should be large enough so that the cat can stand upright, turn around, sit and lie comfortably. However, it should not be too big, because then it can happen that the cat slips unintentionally through the inside of the Carry Cot during transport. This should be avoided in order not to stress the cat additionally.

Make it easier for you to sit the cat down

Very few cats go voluntarily into their cat transport box or like to be put into it. And even taking them out at the vet is a real challenge for many cat owners. It is easier if the transport box can be opened at the top. Because the upper opening makes it easier to put the cat into its box than to push it through the opening from the front. Ideally, the transport box should have two openings – one at the top and one at the front.

Locked up cats can develop undreamt-of abilities and become true escape artists. When choosing the transport box, make sure that the latch closes securely and cannot be opened by the cat. The box should also be robust – after all, it must be able to withstand cat claws and teeth. Carrying handles and strap should be stable. The material of the transport box should be selected in such a way that the cat cannot get caught with its claws or injure itself in any other way.

Pay attention to the ventilation

A transport box usually means nothing good for the cat. Often the unloved veterinarian awaits them at the end of the trip. Cats therefore usually react stressed when the transport box appears on the screen. Stress can cause them to pant. They use more oxygen than when they breathe calmly. It is therefore very important that the transport box is sufficiently ventilated.

Remember to clean it

A mishap may occur during transport. So make sure that the transport box can be cleaned easily and thoroughly. Plastic transport boxes are easy to clean.

Get your cat used to the transport box

Often it is a struggle to put the cat into its transport box. Cats usually associate the box with a visit to the vet and understandably have little desire to go on excursions. It becomes easier if the cat connects the box with something beautiful. Place the box open in the cat’s living area before it is used for the first time. The aim is for her to accept the transport box as a safe den. A blanket, favourite toys and treats can help to make the box more interesting. 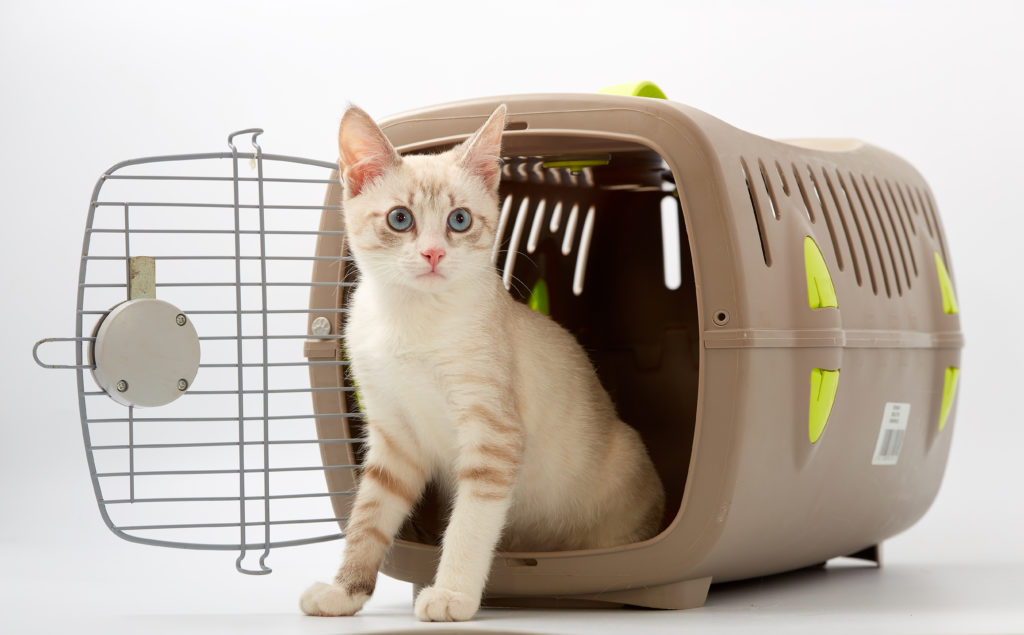 Only very few cats like to lie in empty transport boxes. Therefore it is recommended to make the cat comfortable inside the box. Materials that are non-slip are well suited, for example a stable blanket or a non-slip mat. A cuddly cushion with catnip can also make the cat feel more comfortable.

Do not simply place the transport box on the car seat

Just as with dogs, cats must also be secured as a load in a car. If an accident occurs and the cat is not secured, it can quickly become dangerous. ADAC crash tests with an unsecured dog dummy have shown that in the event of an impact at 50 kilometres per hour, the dummy flies through the interior of the car with thirty times its body weight. To prevent your cat from becoming a projectile and endangering itself and the vehicle occupants, you should never simply place the transport box with your cat on the back seat of the car or in the front seat. ADAC crash tests have shown that the safest place for the Cat Transport Box is in the footwell behind the front seats. Buckled on the rear seat bench, the plastic material of the test box used proved to be too weak in a 50 km/h impact. The lattice door and lid broke under the load of the 4 kilogram light artificial test cat.

At a glance: The ideal transport box for your cat

SENSIBLE FUR CARE FOR CATS：REGULAR BRUSHING AND COMBING A MUST

WHAT SHOULD YOU CONSIDER WHEN BUYING A SCRATCHING POST?

SCRATCHING FURNITURE MADE OF CORRUGATED CARDBOARD FOR CATS

HOW TO TRAIN MY CAT TO USE THE SCRATCHING POST?

HOW TO BUY GOOD SCRATCHING POSTS: TIPS AND ADVICE

STOP YOUR CAT FROM SCRATCHING FURNITURE

HOW TO STOP YOUR CAT FROM SCRATCHING WALLS, DOORS AND FURNITURE

HOW TO STOP YOUR CAT FROM SCRATCHING THE CARPET

CLAW CARE FOR CATS：WHAT SHOULD YOU WATCH OUT FOR?

BUY A CAT PROTECTIVE NET FOR BALCONY AND GARDEN: WHAT SHOULD BE CONSIDERED?

WHAT YOU SHOULD CONSIDER BEFORE BUYING AN OUTDOOR CAT HOUSE

HOW TO CHOOSE THE RIGHT CAT BEDS ON AMAZON

10 TIPS ON HOW TO FIND YOUR CAT AGAIN

The Great Cat is a participant in the Amazon Services LLC Associates Program, an affiliate advertising program designed to provide a means for sites to earn advertising fees by advertising and linking to Amazon.com.
© 2020 Dr. Meow.